INCHEON, South Korea — A landmark report from the United Nations’ scientific panel on climate change paints a far more dire picture of the immediate consequences of climate change than previously thought and says that avoiding the damage requires transforming the world economy at a speed and scale that has “no documented historic precedent.”

The report, issued on Monday by the Intergovernmental Panel on Climate Change, a group of scientists convened by the United Nations to guide world leaders, describes a world of worsening food shortages and wildfires, and a mass die-off of coral reefs as soon as 2040 — a period well within the lifetime of much of the global population.

The report “is quite a shock, and quite concerning,” said Bill Hare, an author of previous I.P.C.C. reports and a physicist with Climate Analytics, a nonprofit organization. “We were not aware of this just a few years ago.” The report was the first to be commissioned by world leaders under the Paris agreement, the 2015 pact by nations to fight global warming.

The authors found that if greenhouse gas emissions continue at the current rate, the atmosphere will warm up by as much as 2.7 degrees Fahrenheit (1.5 degrees Celsius) above preindustrial levels by 2040, inundating coastlines and intensifying droughts and poverty. Previous work had focused on estimating the damage if average temperatures were to rise by a larger number, 3.6 degrees Fahrenheit (2 degrees Celsius), because that was the threshold scientists previously considered for the most severe effects of climate change.

The new report, however, shows that many of those effects will come much sooner, at the 2.7-degree mark.

Why Half a Degree of Global Warming Is a Big Deal

It may sound small, but a half-degree of temperature change could lead to more dire consequences in a warming world, according to a sweeping new scientific assessment.

Avoiding the most serious damage requires transforming the world economy within just a few years, said the authors, who estimate that the damage would come at a cost of $54 trillion. But while they conclude that it is technically possible to achieve the rapid changes required to avoid 2.7 degrees of warming, they concede that it may be politically unlikely.

For instance, the report says that heavy taxes or prices on carbon dioxide emissions — perhaps as high as $27,000 per ton by 2100 — would be required. But such a move would be almost politically impossible in the United States, the world’s largest economy and second-largest greenhouse gas emitter behind China. Lawmakers around the world, including in China, the European Union and California, have enacted carbon pricing programs. 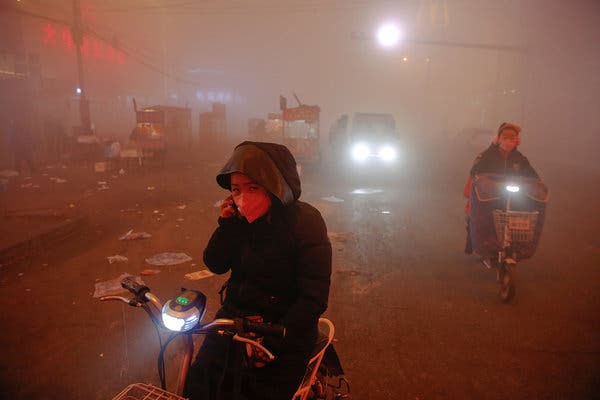 President Trump, who has mocked the science of human-caused climate change, has vowed to increase the burning of coal and said he intends to withdraw from the Paris agreement. And on Sunday in Brazil, the world’s seventh-largest emitter of greenhouse gas, voters appeared on track to elect a new president, Jair Bolsonaro, who has said he also plans to withdraw from the accord.

The report was written and edited by 91 scientists from 40 countries who analyzed more than 6,000 scientific studies. The Paris agreement set out to prevent warming of more than 3.6 degrees above preindustrial levels — long considered a threshold for the most severe social and economic damage from climate change. But the heads of small island nations, fearful of rising sea levels, had also asked scientists to examine the effects of 2.7 degrees of warming.

Absent aggressive action, many effects once expected only several decades in the future will arrive by 2040, and at the lower temperature, the report shows. “It’s telling us we need to reverse emissions trends and turn the world economy on a dime,” said Myles Allen, an Oxford University climate scientist and an author of the report.

To prevent 2.7 degrees of warming, the report said, greenhouse pollution must be reduced by 45 percent from 2010 levels by 2030, and 100 percent by 2050. It also found that, by 2050, use of coal as an electricity source would have to drop from nearly 40 percent today to between 1 and 7 percent. Renewable energy such as wind and solar, which make up about 20 percent of the electricity mix today, would have to increase to as much as 67 percent.

“This report makes it clear: There is no way to mitigate climate change without getting rid of coal,” said Drew Shindell, a climate scientist at Duke University and an author of the report.

The World Coal Association disputed the conclusion that stopping global warming calls for an end of coal use. In a statement, Katie Warrick, its interim chief executive, noted that forecasts from the International Energy Agency, a global analysis organization, “continue to see a role for coal for the foreseeable future.”

Ms. Warrick said her organization intends to campaign for governments to invest in carbon capture technology. Such technology, which is currently too expensive for commercial use, could allow coal to continue to be widely used.

Despite the controversial policy implications, the United States delegation joined more than 180 countries on Saturday in accepting the report’s summary for policymakers, while walking a delicate diplomatic line. A State Department statement said that “acceptance of this report by the panel does not imply endorsement by the United States of the specific findings or underlying contents of the report.”

The State Department delegation faced a conundrum. Refusing to approve the document would place the United States at odds with many nations and show it rejecting established academic science on the world stage. However, the delegation also represents a president who has rejected climate science and climate policy.

“We reiterate that the United States intends to withdraw from the Paris agreement at the earliest opportunity absent the identification of terms that are better for the American people,” the statement said.

The report attempts to put a price tag on the effects of climate change. The estimated $54 trillion in damage from 2.7 degrees of warming would grow to $69 trillion if the world continues to warm by 3.6 degrees and beyond, the report found, although it does not specify the length of time represented by those costs.

The report concludes that the world is already more than halfway to the 2.7-degree mark. Human activities have caused warming of about 1.8 degrees since about the 1850s, the beginning of large-scale industrial coal burning, the report found.

The United States is not alone in failing to reduce emissions enough to prevent the worst effects of climate change. The report concluded that the greenhouse gas reduction pledges put forth under the Paris agreement will not be enough to avoid 3.6 degrees of warming.

The report emphasizes the potential role of a tax on carbon dioxide emissions. “A price on carbon is central to prompt mitigation,” the report concludes. It estimates that to be effective, such a price would have to range from $135 to $5,500 per ton of carbon dioxide pollution in 2030, and from $690 to $27,000 per ton by 2100.

By comparison, under the Obama administration, government economists estimated that an appropriate price on carbon would be in the range of $50 per ton. Under the Trump administration, that figure was lowered to about $7 per ton.

Americans for Prosperity, the political advocacy group funded by the libertarian billionaires Charles and David Koch, has made a point of campaigning against politicians who support a carbon tax.

“Carbon taxes are political poison because they increase gas prices and electric rates,” said Myron Ebell, who heads the energy program at the Competitive Enterprise Institute, an industry-funded Washington research organization, and who led the Trump administration’s transition at the Environmental Protection Agency.

The report details the economic damage expected should governments fail to enact policies to reduce emissions. The United States, it said, could lose roughly 1.2 percent of gross domestic product for every 1.8 degrees of warming.

In addition, it said, the United States along with Bangladesh, China, Egypt, India, Indonesia, Japan, the Philippines and Vietnam are home to 50 million people who will be exposed to the effects of increased coastal flooding by 2040, if 2.7 degrees of warming occur.

At 3.6 degrees of warming, the report predicts a “disproportionately rapid evacuation” of people from the tropics. “In some parts of the world, national borders will become irrelevant,” said Aromar Revi, director of the Indian Institute for Human Settlements and an author of the report. “You can set up a wall to try to contain 10,000 and 20,000 and one million people, but not 10 million.”

The report also finds that, in the likelihood that governments fail to avert 2.7 degrees of warming, another scenario is possible: The world could overshoot that target, heat up by more than 3.6 degrees, and then through a combination of lowering emissions and deploying carbon capture technology, bring the temperature back down below the 2.7-degree threshold.

In that scenario, some damage would be irreversible, the report found. All coral reefs would die. However, the sea ice that would disappear in the hotter scenario would return once temperatures had cooled off.

“For governments, the idea of overshooting the target but then coming back to it is attractive because then they don’t have to make such rapid changes,” Dr. Shindell said. “But it has a lot of disadvantages.”

Welcome! This website presents practical solutions to the most urgent challenge facing humankind – GLOBAL WARMING. We assemble the most promising ideas, technologies, and strategies into one central database.

We have an urgent mission: to make sure that these ideas, technologies, and strategies come to the attention of the right people, with the result that they are abundantly funded and implemented without delay.

Planet Earth has reached the tipping point. There is not a moment to be wasted!